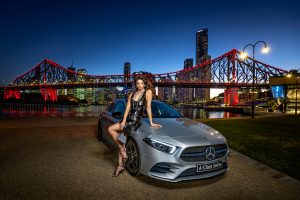 The 13th Mercedes-Benz Fashion Festival Brisbane at new hotspot Howard Smith Wharves was a runaway success, showcasing the very best in Queensland and Australian fashion design.
Howard Smith Wharves was arguably our most glamourous and iconic venue to date, with its stunning river-city location highlighting the best of Brisbane.
This year’s Fashion Festival – held from Sunday, August 25 to Thursday, August 29 – also unveiled unprecedented diversity, inclusion and accessibility.
A prime example of this was our The Fantauzzo Next Gen Group Show which showcased 28 local emerging designers and four fashion colleges.
Our opening Queensland designer at this show, MeQ Designs by Carol Taylor, is the world’s first quadriplegic artist/designing accessible clothing for people with disabilities.

Meanwhile, our Next Gen Group Show closing fashion label, Kimbralou – a local champion of diversity and sustainability – rocked the runway with her larger-than-life, transformative, gender-neutral designs.

This year, every event of the Mercedes-Benz Fashion Festival Brisbane was a sell-out success, proving that the public’s enthusiasm for Queensland fashion is as strong as ever.
More than 3,000 fashion fans turned out for our runway shows and events across the five days of the Fashion Festival, including the new Lunch with the Girls event at Brisbane City Hall, featuring TV icon, Kerri-Anne Kennerley.
Our closing show, the Mercedes-Benz Group Show 2, featuring luxe Brisbane fashion labels Sacha Drake, URBBANA, BlackNBling, Ella Moda, Bora, Kortni Portia, Naudic and Boom Shankar – along with national fashion designer, Aqua Blu Australia – was another absolute triumph of style and fashion.
A total of 42 Queensland fashion designers and 25 national fashion designers were showcased throughout the festival.
Festival Director Lindsay Bennett said he was heartened by the public’s strong show of support.
“This year, the Festival has been an outstanding celebration of the best of Spring/Summer 19 local and national fashion.”

“As always, our focus was dedicated to driving fashion retail for Queensland, by encouraging audiences to connect with local and Australian designers and – See it. Love it. Own it.
“The 2019 Mercedes-Benz Fashion Festival Brisbane was a fantastic event for all involved and we are thrilled and grateful for the public’s support and that of all our sponsors, including the incomparable Howard Smith Wharves.”
This year, the MBFF Management Team was again proud to host Live Streaming of all shows via MBFFTV at www.mbff.com.au.

This website uses cookies to improve your experience while you navigate through the website. Out of these cookies, the cookies that are categorized as necessary are stored on your browser as they are essential for the working of basic functionalities of the website. We also use third-party cookies that help us analyze and understand how you use this website. These cookies will be stored in your browser only with your consent. You also have the option to opt-out of these cookies. But opting out of some of these cookies may have an effect on your browsing experience.
Necessary Always Enabled
Necessary cookies are absolutely essential for the website to function properly. This category only includes cookies that ensures basic functionalities and security features of the website. These cookies do not store any personal information.
Non-necessary
Any cookies that may not be particularly necessary for the website to function and is used specifically to collect user personal data via analytics, ads, other embedded contents are termed as non-necessary cookies. It is mandatory to procure user consent prior to running these cookies on your website.
SAVE & ACCEPT
Go to Top